Entire European countries can fit in the geographical area of Northeastern Ontario. This is a land of forests and lakes, fertile agricultural land, and vibrant communities. Newcomers love the space, climate, and friendliness of the people. They brag to their friends in large cities that they can commute to work in just five minutes.

Northeastern Ontario’s population of 565,000 includes the hub cities of Sault Ste. Marie, Sudbury, North Bay and Timmins, but there are also many smaller communities where newcomers are thriving. Take the time to explore the communities on this site, and we think you’ll find more than one that suits your needs. In the following section, we provide some key facts and figures that might help you decide to make Northeastern Ontario your new home.

Narrator with an East Indian accent begins voiceover by saying I didn't know what to expect when I moved here.

Aerial view of a marina with the sun shining down on the water. Boats fill the marina.

Voiceover continues Would the people be friendly?

Narrator says Would my business succeed?

Aerial view of a northern Ontario residential street with the sun shining over the trees.

Narrator says Could I afford the house I wanted? Would my family feel welcome?

Time-lapse of the stars at night over a darkened house, the Milky Way is clearly visible.

Narrator says Would I be able to see the stars at night?

East Indian man is standing looking at the camera

Narrator is on screen looking at the camera and answers Yes.

Aerial view of a small marina where a large boat is docked.
East Indian business owner is talking to her employees.
A Haitian O.P.P. officer is walking back to his car.

Voiceover continues again saying Northeastern Ontario is a place where you can find the career and lifestyle you are looking for.

On screen
A Vietnamese family is hugging outside.
Two people are kayaking down a river.
East Indian man is looking over a lake.
A person is skiing on a trail.
Three East Indian students are talking in a school hallway.
A Haitian O.P.P. is talking and laughing with an elderly woman.

Narrator says A place where you can relax and spread out and still be part of a warm and close-knit community.

Narrator says A place with affordable housing that is rich in culture, amenities and, of course, natural beauty.

Aerial of a lake at sunset surrounded by trees, with the sun shining on the water.
Children are playing different actives during different seasons.

On screen. Child is driving a ATV through the snow
Aerial view of a river during fall.

Narrator says So, how would I describe Northeastern Ontario in one word?

One screen reads Northeastern Ontario in one word…

Narrator is on screen looking at the camera and answers Home.

On screen reads Your Gateway to the Goodlife is Here. Breathe in a Fresh New Life in Northeastern Ontario.

Breathe in a Fresh New Life... in Northeastern OntarioYour Gateway to the Good Life... is Here 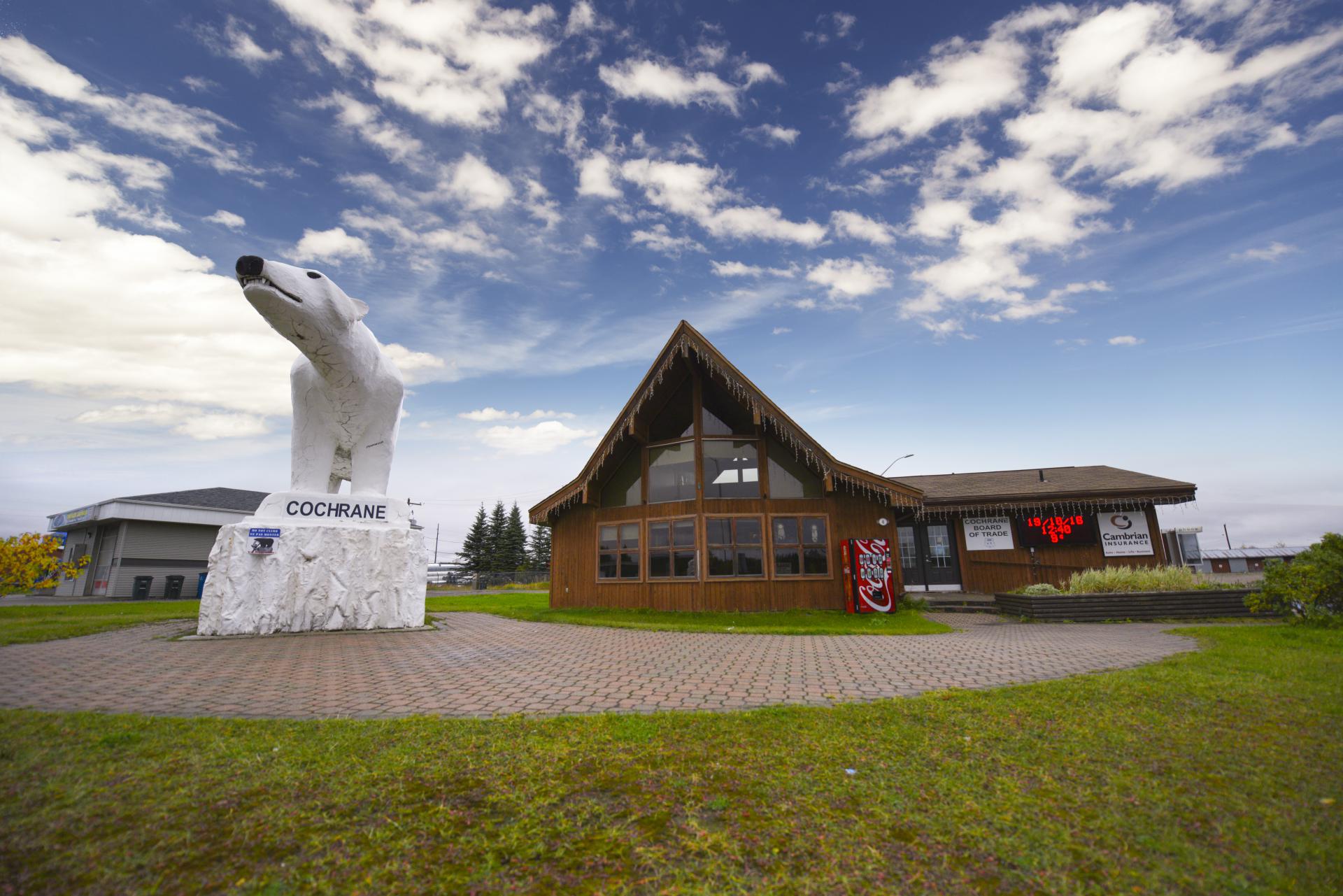 Cochrane is best known as the birthplace of Tim Horton, the Hockey Hall of Fame member who founded the Tim Horton’s coffee and bakery shop chain. Cochrane was one of only seven Ontario small towns named in the Top 50 Small Towns in Canada. Cochrane is also famous for its Cochrane Polar Bear Habitat research centre and tourism attraction. The community offers an affordable quality of life for more than 5,000 people with its low-cost housing and higher than average salaries. The town’s main industries include forestry, mining and tourism, along with retail, service, public administration, health care and education sectors. Outdoor activities include swimming, fishing, camping, hockey, bowling, curling and skating. Read More about “Cochrane”…

Timmins EDC@TimminsEDCDiverse workplaces benefit from employees with a wide variety of backgrounds, levels of knowledge, and expertise. B… twitter.com/i/web/status/1…3 days ago01 February 2023

Timmins & District Multicultural Centre@TimminsDMC'It’s like we’re coming to light in the city' timminstoday.com/local-news/its… via @TimminsToday3 days ago01 February 2023

Timmins EDC@TimminsEDCWhy hundreds of newcomers have chosen to settle in Northeastern Ontario in the past three years sgq.io/RUveQBd1 week ago26 January 2023

Timmins EDC@TimminsEDC"I've heard first-hand from employers that had it not been for the (RNIP) program, you know, they might not have be… twitter.com/i/web/status/1…2 weeks ago19 January 2023

Timmins EDC@TimminsEDCBusinesses that rank in the top quartile for racial and ethnic diversity are 35% more likely to have financial retu… twitter.com/i/web/status/1…3 weeks ago16 January 2023

Timmins & District Multicultural Centre@TimminsDMCProtecting yourself from financial scams begins with awareness. Learn how to detect, respond to and protect yoursel… twitter.com/i/web/status/1…11 months ago16 March 2022

North Bay & District Multicultural Centre@NBDMCWe are here to help you over the phone, email, or Skype. Thank you for working together with us to keep our staff a… twitter.com/i/web/status/1…3 years ago16 March 2020

North Bay & District Multicultural Centre@NBDMC#WeAreHiring! Are you passionate about building welcoming communities? Do you like networking & collaborating? GO T… twitter.com/i/web/status/1…3 years ago03 March 2020

Back to top
Close Offcanvas Sidebar
Assign widgets on offcanvas sidebar position to make them visible in this area.

We are on social media